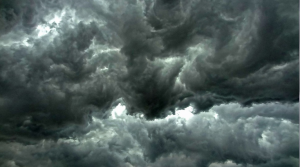 Rumbustious means ‘boisterous’, ‘turbulent’ or ‘unruly’. It is thought to be late 18th century in origin, and it is probably an alteration of the word robustious. Robustious means ‘sturdy’, ‘boisterous’ or ‘rough or violent in manner’.

Rumbustious is typically used in British English. Rambunctious is a variation that originated in the United States and it is now slightly more common than the original (according to the OED).

I like this early usage of one of the many forms of rambunctious: