This term will probably be familiar to basketball fans.

The word alley-oop was first used in the early 20th century, and it is suggested that it originates from the French allez! (meaning ‘go on’ said in an encouraging way) and an alteration of up. 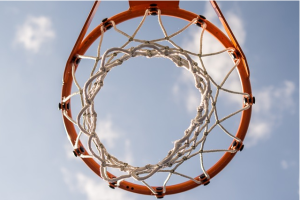 An alley-oop or alley-oop pass is a high pass caught above the basket by a leaping player who tries to dunk the ball before landing.

Alley-oop can also be used as an exclamation. It encourages or draws attention to the performance of a physical feat (often acrobatic).

There is a song by the Hollywood Argyles titled Alley Oop; it was inspired by a comic strip of the same name. I prefer the version that the Beach Boys released. Here it is: